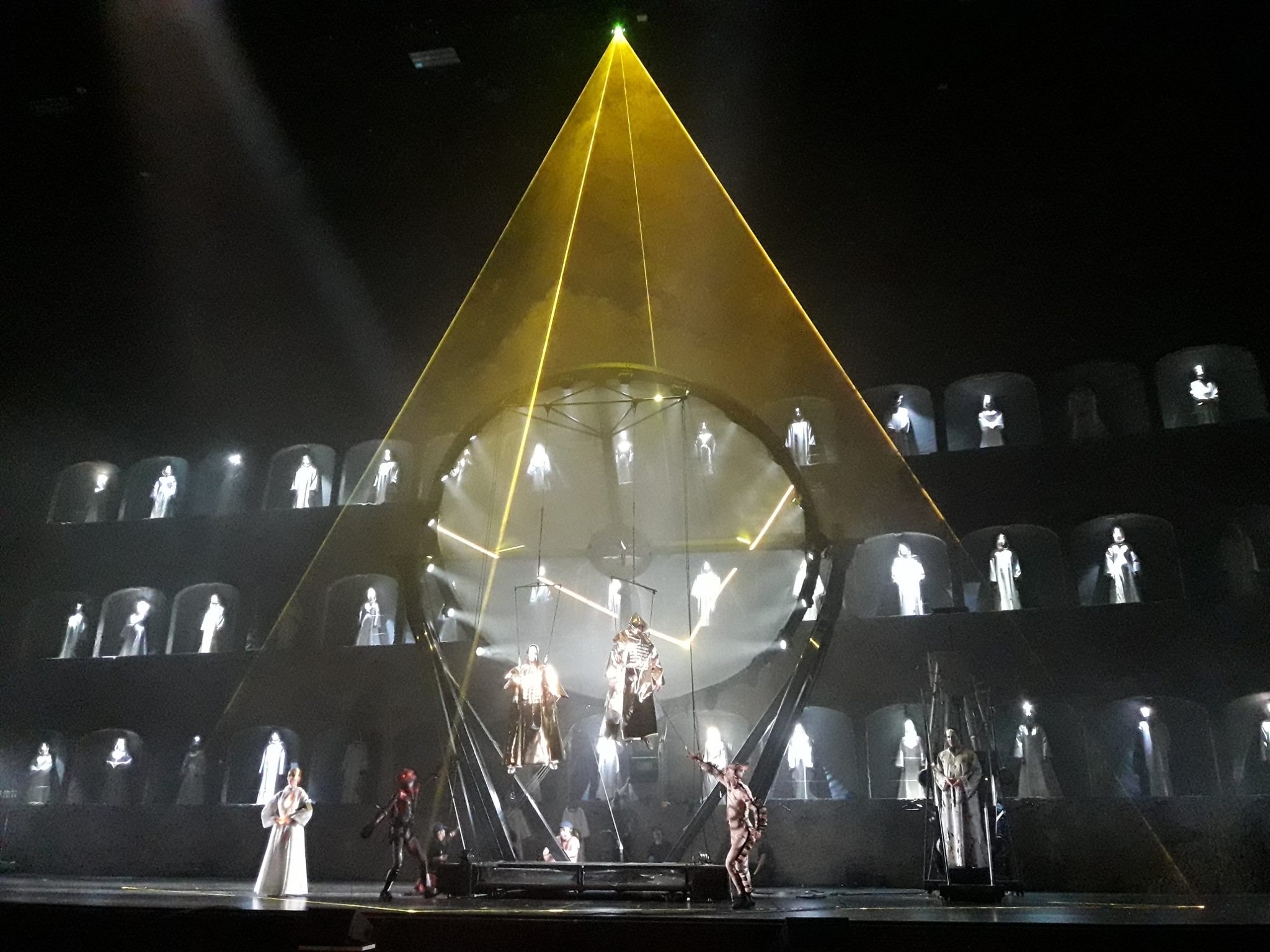 Please find the video-clip of THAMOS, which features both recordings at the end of this text.

The performance (brilliant artistic concept and realisation by “La fura dels baus”) took place at the festival “Mozartwoche 2019” in Salzburg.

The video-clip consists of two parts:

Part 1: the unedited recording of the Nevaton BPT, placed in the 5th row of an unoccupied hall, by Edwin Pfanzagl Cardone

Part2: TV-recording, with mics close to the source and an occupied hall.

All infos are provided by Edwin Pfanzagl Cardone:

“The sound-tracks of part 1 and 2 are not level-matched, so please adjust your headphone level, if you feel it is necessary.

As the dynamics of the unedited Nevaton BPT recording and the level-compressed TV-mix are quite different, the problem in matching would always persist at least what concerns the softer parts of the opera performance with the TV-mix being mixed substantially ‘louder’.

Also, I believe that spectators/’consumers’ of this video-clip should really be listening for other acoustic aspects, e.g. the apparent source width, stage depth and spatial impression.

The NEVATON BPT-microphone has been positioned approx. at head height of a normal audience member in a seat in one of the first rows of the floor area, which provides a “natural perspective” sonic approach.

An important integral part of this recording philosophy is the “ACOUSTILITE” (TM) absorptive acoustic panel, which is placed directly behind the Nevaton BPT microphone, as can be seen on the photos during the first part of the video-clip. (Rem.: documentary photos of the BPT’s position in the hall have been taken on the occasion of the orchestra main rehearsal, for which the Nevaton BPT had been placed in the 2nd row, while for the recording of the dress rehearsal [as used for Part 1 of the video clip] the Nevaton BPT has been placed in the 5th row])
Also, it can be noted that the Nevaton BPT is angled slightly upwards, in order to have a small advantage (level-wise) for the soloists and choir (on stage and/or in the arcades) over the orchestra in the pit, due to the strong off-axis level drop-off for the figure-of-eight microphone pattern which is used for all 3 capsules of the Nevaton BPT-microphone on this occasion.
In order to optimize the direct-/diffuse-sound ratio at the Nevaton BPT capsules a little ‘hood’ – made of the same absorptive foam material as the panel behind – has been placed on top of the ACOUSTILITE (TM) panel, right above the Nevaton BPT-mic.

The avid spectator will also notice that velvet cloth has been strategically placed in front of the Nevaton BPT-microphone to reduce unwanted reflections in order not to deteriorate the high precision in terms of sound-source localisation which the Nevaton BPT is able to deliver.

Despite the Nevaton BPT being a ‘one-point’ recording system, also the spatial reproduction and impression of stage depth it provides is very convincing due to the fact that the L and R capsules deliver highly de-correlated signals.

The TV-mix of Part 2 (starting at 6:30) – on the other hand – is easily identified as having been compressed dynamic-wise when being broadcast and sounds much drier and more direct, which is necessitated also by the visual ‘closeness’ to the sound-sources of main interest (singers), at times. Therefore the TV-soundtrack fully takes into account the need of matching the sonic impression to the visual aspect, a task which is not always easy to fulfil.

However, I would like to encourage the critical listener to evaluate which of the two recordings he/she feels more ‘comfortable’ with, or which one feels ‘more natural’.

Both have their ‘pros’ and ‘cons’ in my opinion: while the TV mix delivers much more detail due to the relative ‘close-miking’ applied in the set-up (which also used radio-mics on the singers and actors), the ‘one-point’ Nevaton BPT recording – due to the absence of any level-compressor – provides a much more natural dynamic range and ‘feel’ to the performance and also the level-balance between the voices and instruments is simply more ‘authentic’. However, in order to still improve the latter aspect, it may have been of advantage to place the BPT mic even further away from the orchestra pit and stage. [Tony Faulkner’s rule-of-thumb for one-point recordings: place the mic 1 to 1,5 times of the source-width away from the source … :-) ]

So – listen carefully, trust your ears, make up you mind …. and – equally important – have fun! ” (Edwin Pfanzagl-Cardone)