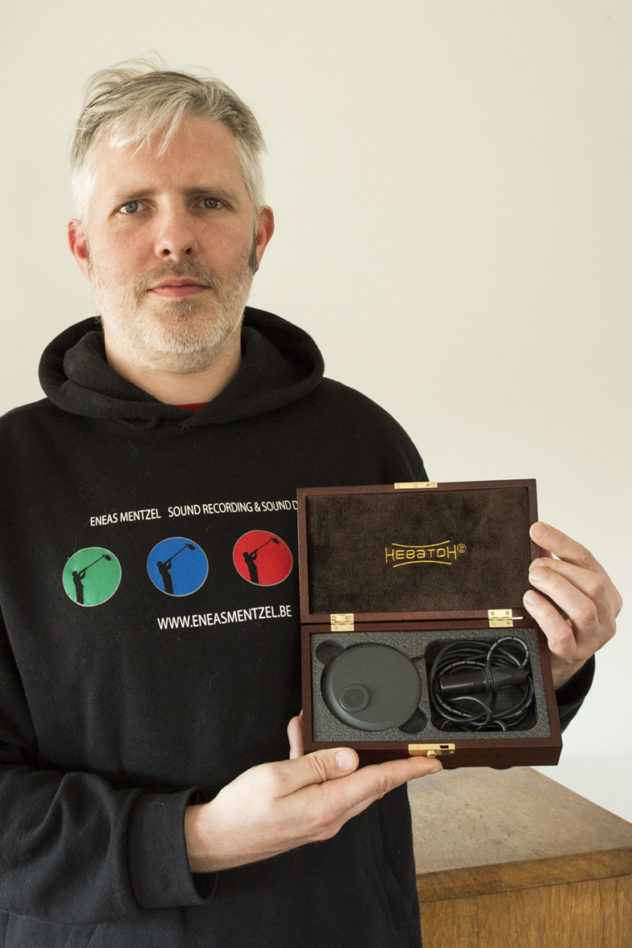 “I stumbled upon Nevaton Microphones by accident and I decided to take a look at their website. I was stunned by the low self-noise that those microphones apparently have.
I couldn’t believe it so I decided to test them out for myself. I ordered the Nevaton MC48 stereo microphone and the MC403 BLM (Boundary Layer Microphone). As I tested them in various situations I came to realize that those microphones do indeed have an extremely low self-noise. I was simply amazed by how neutral and quiet these beauties really are. I purchased the MC403 because I could use it in an upcoming shoot and it excelled in an interior car shot. From the first moment I heard them I fell in love. I already worked with Schoeps and DPA BLM’s and I can say that the Nevaton MC403 without a doubt pulls its string. And all of this at a very attractive price tag. I am already certain that more Nevaton mics will find their way to my setup in the near future and I hope that more people will check out these unknown gems!”
http://www.eneasmentzel.be/

Multiple award winning music producer Michael Seberich (Bozen/Italy): “The Nevaton BPT is a very creative tool which has completely convinced me with its sonic capabilities and therefore is being used on most of my recording sessions.”

Michael Seberich has worked for DECCA, DEUTSCHE GRAMMOPHON, EMI, RCA, SONY and many other record labels and is one of the first excited owners of the Nevaton BPT microphone.

“I spent a wonderful afternoon and evening with the new Nevatons. They are incredible. Never heard a mic that depicts transients in such a fast, clear, precise and high resolution without any harshness. The sound overall seems -first impression- to be the soul of an acoustic spy who transmit the signals as if they were not a record, but the truth.
For the moment, I cannot imagine, how the result will be after a post-production (I fear, it will be unexpected and outrageously marvellous!)”

“The Nevaton MC51 always impresses me with its extremely natural sound reproduction. In the recordings for the last album of “Die Fantastischen Vier” (Captain Fantastic), I used them as overhead mics on all tracks.”

TAPE OP: “In the case of the Nevaton mics, the vibe was very similar to the feeling I get when using excellent vintage mics that were also typically designed and built under one roof. To be finding this vibe and such great sound in mics in this price range is impressive. Bravo!”

Tape Op is a free magazine exclusively about recording music. Subscribe (yep, for free) at tapeop.com.

“I got the microphone a few days ago, tested it and found it sounds incredibly transparent and smooth!”

NEVATON MC416 – “On vocals, the MC416 sounded marvellous — just one of those situations where you’re almost distracted by how good it sounds.” “There was nothing that the (AKG) C 414 had over the MC416 and I preferred simply to enjoy listening to the MC416 at work.”

Mention the phrase “Russian-made” and it conjures up images of Soviet design – generally not thought to be the most elegant. In the context of microphones, it usually means bulky, grey tubes that look like submarines rather than precision instruments for capturing sound.

(12/2016) Gearslutz usercomment about recording acoustic guitar in stereo:
“My go-to is a Nevaton stereo mic, a condenser with a “soft” top end, not bright or brittle, but not dark sounding, just “pretty”.

Rob Tavaglione, for PROAUDIOREVIEW: “I’m particularly fond of the stereo mics: the MC48 for its sweet sound and adjustable versatility and the MC404 for its quirky uniqueness and, yes, lack of versatility. The two multi-pattern condensers (the MC51 and the MC416) bring an ample feature set to the table with pleasing sonics, quality workmanship, and just enough color to keep things interesting. If this sounds intriguing, I would recommend that you bring your mic closet into today’s global economy with these fine offerings from Nevaton.”

With roots dating back to 1947 at Leningrad’s Optical and Mechanical Association – a.k.a. LOMO, makers of the prized LOMO 19A19 tube mic – Nevaton Ltd. formed in 1991 in St. Petersburg, Russia along the Neva River. Comprised of a group of former LOMO engineers, Nevaton designs and builds a series of studio condenser microphones now available in North America.

Prairie Sun Drum Overhead Mic Shootout: “The Nevaton MC-49 had a muscular, powerful sound with a huge kick and tons of warm low end. The high end is a little hyped but very smooth; my hi-hats sound bright and present, not grating or harsh. On Johnny’s hi-hat groove, you could just about punch it in for the KM54. This MC49 a fantastic choice for picking up the entire drum kit with two microphones.”

Prairie Sun is one of Northern California’s coolest recording studios. It’s not just the funky rural setting, with the studio spread out across a half-dozen outbuildings that could easily be mistaken for just-another farm… nor the collection of vintage gear that has to be seen to be believed…

Result: Nevaton MC49 is one of the best!

When it comes to drum programming, authentic cymbal sounds and feels can be the X-factor in getting the desired results. The prolific software developer FXpansion is helping producers, engineers and beatmakers along with Zildjian Digital Vault, a comprehensive collection of Zildjian cymbal recordings ready to go for the BFD2 drum production workstation or BFD Eco …

“I have owned the following pairs of SDC condenser mics in the last 4 years in addition to the Nevatons (this is an abbreviated list):

I have sold them all because for my tastes and my environments, nothing could ever come close to the MC49 (not even the Schoeps!) ”

During the brief time I’ve spent working with the MC51, I’ve thoroughly enjoyed its warm, revealing sound and its versatility.

Edwin Pfanzagl-Cardone, head of the acoustic department of the world-famous Salzburg Festival.

“The Nevaton microphones sound fantastic and have technical parameters like for example an extremely low self-noise which cannot be found in products of other brands.”

“among experts this brand is an insider-tip since many years.”

“The Nevaton MC404 is a fantastic microphone that makes it easy to get a stereo recording. All you need to do is walk around the room and listen for the spot that sounds the best and put the mic up. Simple! This has become a “go to” microphone for me because it sounds great with no colouration.”

“I positioned the 404 with it [Roland Jazz Chorus 70 guitar amp] and the centers of the two speakers forming an equilateral triangle. I feared I might get a hollow center or excessive stereo imaging, so imagine my surprise at finding a sufficiently strong middle, super width, detailed and fluid imaging… and absolutely no EQ required!”

The MC 416 is a first-rate mic, which can compete with microphones on the top level, even if its price is one step lower.

Used with acoustic guitar, both Nevaton microphones sound excellent and expensive, if you like a clear and brilliant sound. This sound is often in demand, especially if the high frequencies are as well represented as here.